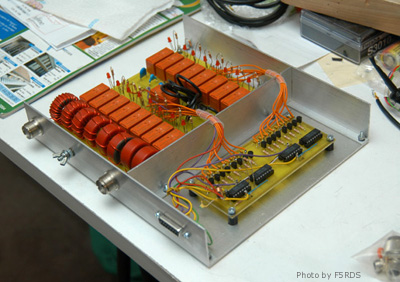 If you have already read my page describing my operating conditions, you might have understand that I regularly tune an antenna tuner at the base of a random wire with cointerpoise. Even if there are ways to do it, it is not convenient to do when the transceiver and the antenna tuner are not located in the same room. This is the reason why I decided to build a remote antenna tuner.

I could have made the choise of purchasing an automatic one but I wanted to give a try to make a remote tuner myself, in a pure Ham spirit, starting with the design, then with the building.

However, I did not want to re-invent everything, so after having read a lot of sites and carefully tried to understand how the commercial automatic tuners are built, I selected a L-tuner design with the possibility to switch with a relay the capacity to the imput side or to the output side.

For the variable capacity, I choose an arithmetic progression of capacity with 8 relays, starting from xx pF up to yy pF for the highest capacity. The four smallest capacitors are made of short sections of RG-174/U coaxial cable.

For the variable inductance, I also retained a 8 relays design with ferrit cores T-106-2 (red) for individual inductors with the following values:

Inductance values were calculated with CoilBuilder_99 software (by the way, this site is excellent for homebuilders since there are wide number of quite simple projects to build)

On each relay, there is in parallel a 1N1418 diode in backward position to limit back current when the relay is switched off and also a 100nF capa in parallel.

Initially, I tried to adapt a clever design published by F5VEA in REF journal (french national association), REF Number 728, December 2000, p. 42 to 43. The idea was to use binary counters based on 4516 to generate the binary outputs to control the relays, with the possibility to reverse the counting direction. However, after several attempts to make it working, I realized this counter approach was not a practical way for me because, it was far too long to reach a tuning point based on a 8-bits design with a frequency clock that would allow an accurate stop at the tuning point (about two minutes to move from #00 to #FF). I must say the the author used this design for only 6 bits capacity, resulting a a shorter time to cover all the possible output values. Additionally, when stopping counting then resuming the counting in one or the other direction, I was quite often observing a random jump to another binary configuration which ended up in a completely detuned configuration. I did not continue to experiment with this circuit knowing that it would not have been practical to use anyway and started to look for other ways to control the relays.

Wanting to mimic the use of a tuner in the shack, I imagined that the easiest way would simply be to have one control knob for C and one for L that would allow to increase or decrease the values as if I were tuning a real variable capacitor and inductor. That was it: use of a variable potentiometer to drive a A/D converter. A rapid search on the Internet allowed me to identify a circuit that would make the job : the ADC0804 from Harris semiconductor. It is a A/D converter with an analog input and a 8 digits output. Each output drives the BC547 so I had just to remove the previous 4516 counters of the original prototype.

The main issue I faced with the ADC0804 A/D converter was the sensitivity to noise on its input: it worked very fine with a short lenght of command line (50 cm) but with a 20 meter lenght of shielded line, I was unable to stabilize the digital outputs (the one or two less significant bits – LSB – was/were always fluctuating between state 0 and state 1, making the corresponding relays vibrating as mad !). I found a correct solution by adding an optocoupler just at the input of the ADC0804 to ensure a good protection against noise when using longer command lines.

In the end, in the shack, I have two potentiometers, one to remotely control the capacity and one for the inductance and one simple switch to commute the capacity up front or on the output side of the tuner. The only minor issue is a slightly changing state of the LSB of each ADC for some given positions of the potentiometers: when moving the potentiometers slowly, one could expect a clear and immediate change from state 0 to state 1 or the contrary, but the real result is an intermediate state between 0 and 1 on the LSB resulting in a noise in the corresponding relay like a buzzer : not very good for the relay, but since the tuner is in the next room, I can hear it and select the appropriate potentiometer positions (silent position !). This is not nice but I haven’t yet found the solution. Electronics is not my job, just a hobby, so I am not affraid to provide a real feedback on my results and I’m sure someone can find a way to fix this: if you succeed, or even if you think about a possible solution, please don’t hesitate to communicate me your fix to my e-mail address, this will be much appreciated !

With my 6 meter random wire and two radials of about the same length, I can tune from 40 to 10 meters without any issue and 100W SSB are easily handled. 80 meter band could even be tuned but is useless in term of radiation efficiency with my current antenna, just useful for RX.